The UNI GeoTREE Center has developed a web mapping portal to provide interested citizens and businesses in Iowa access to modeled potential solar radiation for all locations in Iowa. The web portal, entitled Iowa Solar Asset Mapping (ISAM), provides the ability to zoom anywhere based on an address or location in the state and define an area of interest and see estimated annual and monthly solar radiation values. It also provides estimated solar radiation values for known building footprints in several counties in Iowa (Johnson, Polk, Pottawattamie, Scott, and Story).

The ISAM application should only be used as an investigative screening tool and not for final decisions on where to place solar installations.

The project was funded by the Iowa Economic Development Authority Energy Office. Any questions should be addressed to John DeGroote of the UNI GeoTREE Center at john.degroote@uni.edu. 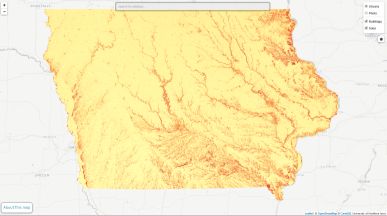